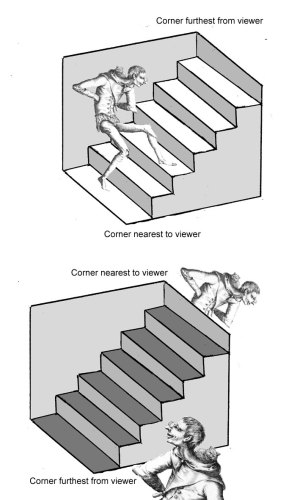 The two staircases to the left are identical, though with different shading, but the top one is meant to appear as if seen from above, the lower one as if seen from under the stairs. Both can still appear as if seen from above, because by default we seem to be hard-wired to see things from above, (or do we rather learn to see them that way from experience in infancy?). Hopefully the demonstrator I have recruited from a print by Pieter Bruegel the elder will help. If not, try concentrating first just on seeing the upper corner of the lower picture as the point in the image nearest to you. Reversing stairs like these are called Schroeder staircases, after the nineteenth century researcher who first wrote about them.

In the lateral staircases in comic book picture 20, lower steps appear as if seen from above, yet the upper steps appear as if seen from below. There would be nothing odd in everyday vision in seeing the upper part of a staircase from below, and the lower part from above, if we were seeing the stair in normal perspective. The long stair edges would converge to a common point in the distance. But that's just what does not happen in this picture. Looking at the left hand stair, the long edges of the lower stairs recede into distance to the left, whilst the long edges of the upper steps, if seen from below, recede into distance to the right. So as the eye travels up the staircase, the axis of recession into distance of the stairs has rotated through ninety degrees, even though all the long edges have remained parallel to one another.

There's a similar effect at work on the stair that appears along the bottom of comic book picture 20, even though here the stair-edges do converge with perspective. This time there's a problem with the vertical axis of the scene. Gravitational vertical is at one orientation for Ben to the right, but by the time our eye lights on the jester to the left it has swung like a pendulum, once again through ninety degrees.

As with the impossible triangles and rectangles of the commentary to comic book picture 14, The Castle in the Air, we make global assumptions about the orientation of geometric surfaces based on what we see in whatever part of a scene we are fixating at any moment. We assume that the orientation of these geometrically related surfaces will transform in an orderly way from one right-angled corner to the next as our eye then travels over the scene. That need not happen in graphic space, where brilliant effects were created by Mauritz Escher, (mentioned in connection with pattern above), once again at www.mcescher.com (click on gallery, but this time next click on Recognition and Success).

(However, Escher never allowed one of his staircases to reverse half way up, as happens with the lateral stairs here: in his pictures, as in the Schroeder staircase demonstrations to the left, the whole stair is either seen one way up or the other).

Reversing stairs are tricky to experiment with without first getting used to drawing in perspective. But try starting with a single stair. Avoid perspective, in which lines converge to a vanishing point, (as in the stair at the bottom of comic book picture 18), but stick instead to a parallel projection (as in the demonstrations to the left). Then add context around the stair, to locate it spatially and to try to get it to reverse.