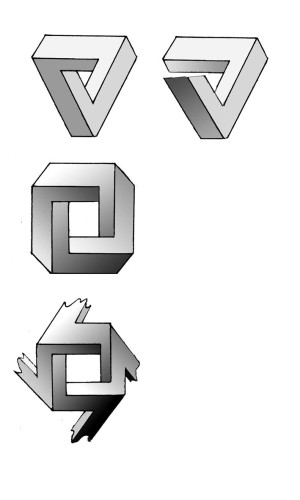 Impossible figures like the ones to the left were first published by Lionel and (now Sir) Roger Penrose in the nineteen fifties. As the slightly opened up version of the three-sided figure suggests, a real open, three-armed shape can look like the impossible closed version, but only if you choose the viewpoint and lighting extremely carefully, so as to line up the nearest and most distant parts. (When this is set up in museum and science centre demonstrations, the impossible view is usually through a reducing lens, so that the whole image is in focus, eliminating depth cues through focussing that would otherwise give the game away). For a brilliant discussion and explanation, see Richard Gregory, Eye and Brain, (5th ed., Oxford University Press 1998), pages 235-240.

You can construct related figures with as many sides as you want, but with more than three arms surfaces have to twist through space to connect up, and with more than four arms the figures tend just to look twisted - our attempts to impose an impossible rectilinearity on the images breaks down. For numerous views of exotic versions by Gerschon Elber, some multi-sided, and also for a variety of real twisty three-dimensional versions of them, see his website www.cs.technion.ac.il/~gershon/EscherForReal/.

These images present two main lessons. One is, as with almost all the pictures here, that our assumptions about whole scenes are based on what we see in a very small part of them. The second is to do with the kind of cue that misleads us here: it is the apparent geometrical regularity of the corners. So used are we by experience to assuming that corners are right angled, and that the surfaces they connect are flat, that we mentally join up the corners in these figures, even though it would be improbable for them to connect in reality.

Note that to lower left, I have added extensions to a four-sided impossible figure. In comic book picture 14, The Castle in the Air, the extensions have become turrets as Fran escapes whilst the castle turns inside out. You could construct other impossible buildings with extensions like these, but try also seeing what happens when you make an extended lattice, in which the arms that become towers in my picture lead instead into extension arms of neighbouring impossible figures.